On this day 208 years ago, the racecourse at Hyde Park was in full swing. Annual race meetings were being held with feasts and balls extending the frivolities beyond the track.

The 73rd Regiment were primarily responsible for organising the race meetings at this time and the first one had been held in October 1810, sanctioned by Governor Macquarie. A grandstand was set up for the ladies of the colony and the finishing post was situated between what is now Park Street and Market Street. On that first day, Colonel Maurice Charles O’Connell, Lieutenant Thomas Wright, and Messrs Simeon Lord and Williams acted as the stewards for the day.

The first race was “A Plate” valued at 50 guineas, given by the subscribers of the course. It was won by Captain Ritchie’s ‘Chase’. He would go on to win the Cup on the second day of the race meeting. Mrs Macquarie presented the cup to Captain Ritchie. 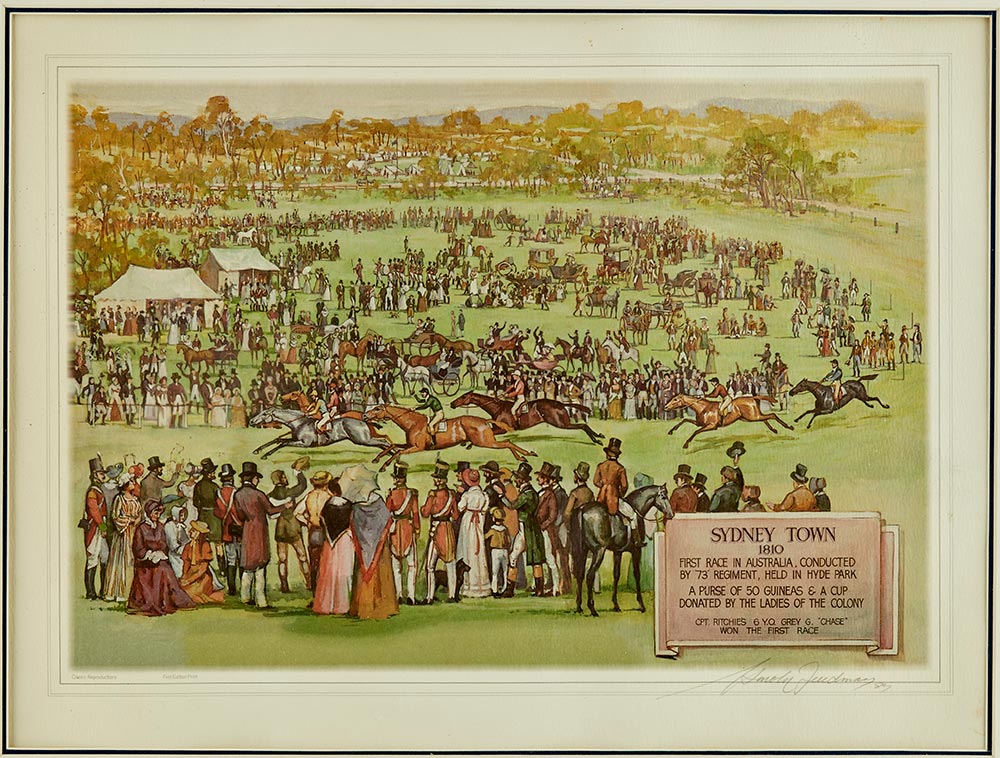 The next year the annual race meeting was held in August. The first day of the meeting, on 12 August 1811, had a Subscription Plate of 50 guineas (won by Mr Birch’s ‘Matchein’), and a sweepstake for two-year-olds which was won by Captain Ritchie’s ‘Cheviot’. On the second day, the Ladies Cup was won by Colonel O’Connell’s ‘Carlo’ and a pony race by ‘Fidget’ owned by Mr James Cox. The last day of the meeting had the Magistrates Subscription Plate of 50 guineas. Run over a series of heats, as the races generally were at that time, it was eventually won by Mr Williams’ ‘Strawberry’.

Meetings continued to be held at Hyde Park until 1814 when the 73rd Regiment left Sydney. Though there was then a gap in the racing program for a number of years, there was a revival in the 1820s with a variety of racecourses springing up across the colony and renewed racing at Hyde Park among other locations.

Hyde Park in the early days of the colony, unknown artist